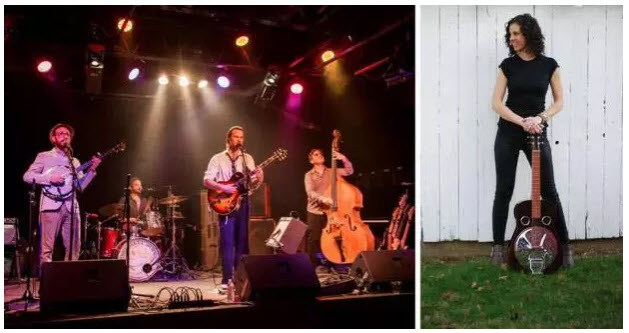 Friday, May 18th 2018 at 39 Erie Street at 2nd St in Jersey City as Cathedral Arts Live! presents Abbie Gardner and Roosevelt Dime Abbie Gardner, the fiery Dobro player with an infectious smile has been touring with Americana darlings Red Molly for the past eleven years. After gracing stages from Denver to Denmark, from Australia to Austin, the band decided to take an indefinite hiatus in 2015, so Abbie is striking out on her own! No stranger to solo performing, she has three CDs to draw from, each with award-winning songs. Tales of love and loss, both gritty and sweet, ride the back of her by-now familiar, formidable slide guitar licks. She channels Lucinda and Bonnie, but remains pure Abbie. She has been recognized as an award-winning songwriter, as well, with such accolades as; 2008 Lennon Award Winner (folk) for The Mind of a Soldier and 2008 American Songwriter Magazine Grand Prize Lyric Winner for Id Rather Be. Her song Honey on My Grave was also published in Sing Out! Magazine in 2008. Roosevelt Dime: Seamlessly combining the feel-good groove of classic Rhythm and Blues with acoustic Americana instrumentation, Roosevelt Dime has crafted an infectious style and sound truly their own. Eben Pariser fronts the band with searingly soulful vocals, belted and whispered with a passion and panache straight from the juke joints. Andrew Green’s innovative piano-inspired banjo style, equal parts boogie woogie and bluegrass, lock in with the New Orleans clave rhythms of Tony Montalbano’s drums and Craig Akin’s syncopated upright bass. The swampy chords and swinging blues lines of Pariser’s semi-hollow electric guitar thicken the sound further still. By following the strains of Americana back to its roots, they not only combine aspects of different genres, but challenge the notion of these differences at their core. Hailing from Brooklyn, New York, the band started in the age old New Orleans street busking tradition, only it was the bustling avenues of the Big Apple rather than the Big Easy that first nurtured their sound. All walks of life were drawn to the undeniable positivity and crowd-sourced spontaneity at these revelries, and this literal grassroots community-building stuck with the band as they took their joyous beat from the city’s parks and subways to seek that same heartfelt connection with audiences worldwide. Armed with original songs of hope, love, and conviction that sound birthed from the cradle of American music yet still crucially relevant to the times in which we live, their performances are a perpetual crowd pleaser (NY Times) in any setting. Tickets – $15 in advance & $20 at the door.